I Yam What I Yam

I have to be honest (forewarning, that's what this post is all about,) I often find the "quilt world" suffocating and frustrating. I entered this realm when I was a tad over twenty years old, I'm now thirty-six. Pretty much since the beginning, I've been far more interested in making art quilts than bed quilts. To be honest, the local guild I found was not receptive to 1. My age at the time and 2. The "quilts" that I was making. There is nothing worse than getting up for show and tell at a guild, and having no one respond in any way when you show your work. (If you know me, and you're one of the people who were cold and standoffish back then - you suck!)

When I started to move into the blogsphere, I was advised to not rock the boat too much. To be careful what I say. To be a goody-goody. I cringed but accepted the plan after seeing a very well known and loved quilter be shunned because of personal life choices that were none of the community's fucking business. So I tried to do it. However, I've come to realize that in doing so, I have disconnected myself from who I really am. For the most part I have kept my posts "clean", "polite" and "acceptable" by most traditional quilter standards. On top of that, I have kept my work at those standards as well.
Maybe it's getting older, I don't know, but for awhile now I have been getting very antsy about "pretending" to be something I am not. Honestly, any of my friends can attest - I adore swearing. Seriously. I talk like a sailor. I'm not rude, but I am unfiltered.
Some things about me: I'm opinionated as hell and enjoy a good debate about politics. I'm freakishly liberal, but I do support things like background checks for guns. I love beer. Oh, and whiskey, really-good-not-cheap-whiskey. I watch shitty reality shows - yes, I watched Jersey Shore. Also the Kardhashians. I also love Nova, documentaries and TED Talks. I have a special love for puns and knock knock jokes. Now that I've started weight training, I take pictures of my biceps often to watch them grow.

The point is, I don't want to pretend to be all Miss Prissy Nice anymore. It makes me uncomfortable, and I think that's why I became so bad at keeping up this blog. It becomes too exhausting and depressing to continuously filter out ideas and "conversations" in order to not offend someone. I'm not a politician, if someone doesn't like me I'm not going to lose this blog. They just won't read it anymore.

Which brings me to another thing. Groups of people (quilters are no exception) are notorious for getting in an uproar that "so-and-so" did xyz, therefore we are going to boycott. But honestly, most times that's just talk isn't it? So there's a good chance that even if someone says, "I'm so offended I'm never going to read your blog again!" that they will indeed be back lurking the very next post. (Maybe we will get into the sociology aspect of that another day...lol.) After all these years I have only boycotted one thing, I now avoid licensed fabrics with stipulations on them, because I think telling me I can't buy Ms. Fancy Designers fabric and sell something made from it is complete and utter bullshit. If I'm going to pay $15 a yard for you fabric, shut up and take my money, and let me USE the stuff. (Sorry...soap box tangent!)

With that let me just say, I'm Stephanie, and I'm a girl who fucking loves fiber! I don't know how often I will post, but when I do it will be ME who is represented.
Do you feel that you alter the appearance of who you are to "fit in" in the quilt world?

- Posted using BlogPress from my iPad

Posted by Stephanie Forsyth at 8:01 AM

Stephanie Forsyth
Stephanie Forsyth is an artist, primarily focused on fiber but also a dabbler of all things mixed media. Her latest obsession, watercolors! She is a quilter/artist by day, and craft-brew-drinking-sailor-talking-swashbuckling-sassy-lady by night. Stephanie is most inspired by people watching, nature, snarky humor, and color, color, color! Originally trained in graphic design, her work often focuses on contrast, balance, and strategic negative spaces. She loves her family, her kitty, beer, tattoos (even if she is too scared to get one,) and learning the banjo and ukelele. 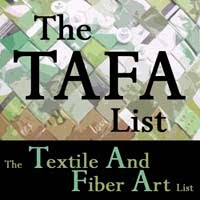